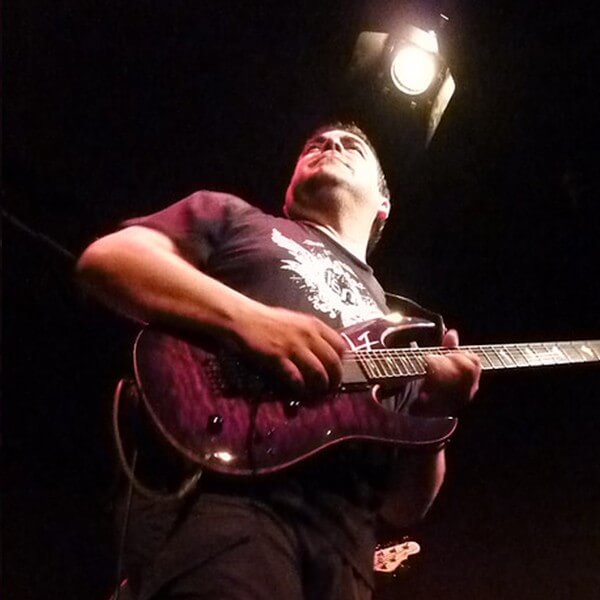 Jorge Lario is one of the most renowned electric guitar players in the area of Valencia, Spain. As a professional musician we find his name linked to the band Revolver from 1988 to 1992, a period in which he records the first two albums of the band and carries out several Spanish tours with shows in some of the most important venues like the 'Great Musical' in Valencia or the 'Universal Exhibition of Seville'.

Throughout his 30-year career he has worked as a studio and live performer with bands like 'Luna de lobos', 'TĂˇbata Ley', 'Eva', 'Mauri Sanchis Band', 'Doble o nada', 'Mala Vida', 'Moritz' o 'Leo Segarra'. For Leo Segarra, Lario works as musical director and producer and he is nominated by the Academy of Music for best producer of Spanish Rock award in 2008.

As a producer he has worked with countless bands from the Valencian Community, including 'Mala Fama' and 'Genio y Figura' (both, winners of the Rock Circuit competition), 'Quinta Planta' or 'Relevo de Plata', DJ like 'Ximo Bayo' and singers like 'Carlos Ortiz'.

He has also published arcticles for Spanish music related magazines, such as 'On the Rocks', and specialized guitar magazines such as 'Guitarra Total'.

His first instrumental record "01" has earned great praise from the specialized critics.

He is currently CEO and manager of the Modern Guitar Department at 'L'espai Musical' music school, demonstrator for LAG and Raimundo guitars and Thermion amplifiers.